Without a past there is no future
Music of Time. Played by Donetsk city.

“This mineral will be very useful, if not for us, for our descendants for sure”
Peter the First

“While wandering down the streets of Lvov or Kiev, spirit of the history is felt… And in Donetsk it is felt like this is a progressive, interesting, but… a young city…” – those guests having the similar perception of the miner’s capital are on the wrong way in their searching. In order to HEAR the history of our land. 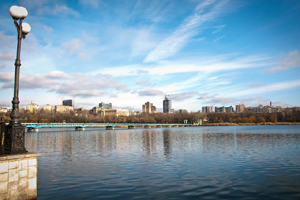 Indeed, in order to hear the music of its history, ones journey should be started not from the Artema street burning with modern lights, but from the virgin wild Donetsk steppe. Fortunately, such places remained intact in our natural reserves. Close you eyes, and keeping your ears open for the sounds blown by the steppe wind, you will hear, together with grass rustling, the grasshoppers’ violins, songs of the steppe birds, a clear metal rhythmic sound – this is “the first Donetsk man” sharpening his bronze knife. And this isn’t a phantom of admiring imagination. In 1959, two ancient old tombs were found in the territory of our city. One of them, discovered in the Radishcheva street in Petrovskiy district of Donetsk city, is dated back to the early bronze age.  Another one, in Kievskiy district of Donetsk city, in the territory of the Central mine rescue-station, - to the later half of the third century A. C. Here is a young city, more specifically, an ever-young  one!

Before the Welsh industrialist John Hughes in the territories of modern Donetsk, our lands are commonly supposed to be the Wild Field. Now listen carefully. Can you hear this continuous wild patter of hoofs? One can hardly imagine those hoofbeats endured by this land. This field has always been wild, but not for its shape, but for its contents.

In the valley of the Kalmius river, where Donetsk is located, some nomadic tribes were changed by the others: the Cimmerian, the Scythians, the Sarmatians, the Goths, the Slavs… They were the ones who awarded the river with its name: according to one theory, Kalmius is translated as “the nomadic river”. But there is also another one. The first part of the word may be attributed to the Turkic word “kal” – “gold”. For Donetsk land is also rich for many minerals and natural resources, its land is full of almost all chemical elements of the Mendeleev's table, including gold and other precious metals.

In those days people already understood that the steppe riches are hidden in the entrails of the earth. Probably, together with cattle breeding and farming agriculture, they would come to coal mining much earlier… But can you hear this harsh restless cracking? The steppe is burning!